Adrian and I were called to pursue adoption in the spring of 2012. We are a blended family and never had any intention of expanding our family, but God made it abundantly clear that he had bigger plans for us.

After reading the book, Reckless Faith, I was convicted and convinced that we needed to start praying about adoption. Adrian read the book a short time later and after reading just the first few chapters – and for three long weeks he waited before telling me that he read it – he also felt called to pursue adoption. 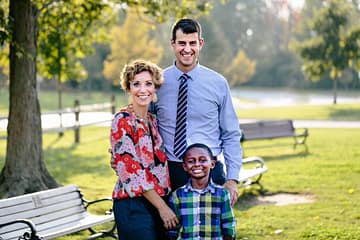 Then we discussed adoption with our two older children, Emma and Gabe, and they were both enthusiastic about it. I wanted to go with a certain adoption agency, but God stepped in once again and this time he opened the doors for us to use Caring For Kids. We completed our home study in 2 ½ weeks, which was around three months faster than normal. We were matched with Benjamin’s birth mom the same week that the Micah 6:8 adoption committee informed us in what capacity CCC could help us financially. Benjamin was born on February 27, 2013, just eight months after we had started on our journey.

The month before Benjamin turned 3, he turned to Adrian and me in the kitchen one evening and, out of the blue, asked us if we had adopted him. We were taken aback, but replied with a simple, “yes.” Benjamin gave that some thought and asked us why it was we adopted him. We replied, “Because we love you.” After a minute, Benjamin looked at us and said, “You know… God adopted both of you, too.” BOOM! This is exactly why we adopted.

If you’re interested in adoption or simply have questions and want to learn more, contact Caring for Kids, a local adoption and foster care agency. They’re ready to answer any questions you may have via phone or email, or you can attend one of their monthly info nights for in-person help.